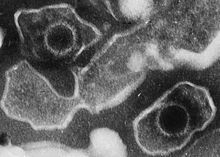 I recently had a question concerning Epstein Barr Virus and I thought I would share some details about my own experience working with a client who experienced similar issues and how we cleared the conflict so the client could begin getting well.

Epstein Barr virus is caused by a cortex issue healing that gets stuck and 'Hangs'. How it becomes stuck is due to a person going through one conflict and then going into the second phase of that issue.

During the bout with influenza, the person has another conflict that is related to the healing they are going through, the healing becomes stuck, it hangs and does not go away.

An example is a client I worked with. He lived with his wife and child in a horrible area of a city in the UK and they needed to move. Because the husband was under constant stress from an unpleasant neighbour, he has a shock that eventually reversed itself when he sold his house.

He then got the flu. He had to move the family out from the house, while he was sick with flu, so this meant a lot of work and packing. During this time, he was laid up in bed and feeling very sick, something women call the "Man Flu". When his wife said to him to his face, 'You Are Pathetic' it shocked him to the core. This created yet another conflict for the man.

He developed Chronic Fatigue Syndrome diagnosed by finding the Epstein Barr virus. The man was stuck in the second phase without the deep symptoms of flu but still having no energy, a foggy head, and inability to work. He was left in a hanging healing because, everyday his saw his wife, she would 'unconsciously' remind him of being pathetic and the disease never completed.

So we would look for a disease, probably flu or a cold that happened before the main symptoms kicked in, then look for the second conflict and how it is being repeatedly triggered. We would uncover whether it was a partner, mother, father, boss that might have caused the second shock to occur. The goal is to remove the second conflict shock first, then clear the shock that caused the main disease (probably the flu) to occur in the first place.

How do medicines affect energy-based therapies?
Taking Statins
Richard Flook's Blog - Ahead for 2013